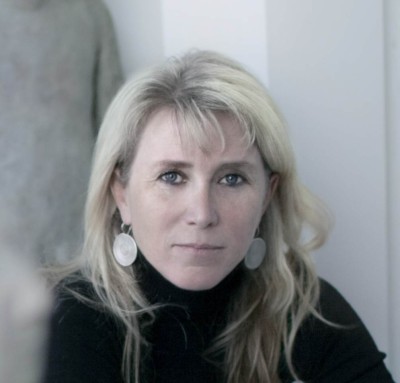 The sculptures of the French artist Agnès Baillon make us discover unique pieces in resin, painted in white in certain places, as well as painted bronzes, whose particularly delicate execution reflects the subtle games of human physiognomy, imprint, above all, of a dreamlike serenity.

Agnès Baillon is originally from around Montpellier. Driven by a political conscience, she rose up very early on against the military installations in her region and against nuclear power, to defend peace and freedom. Today, she lives and works in Paris, where she studied drawing and painting in 1986 at the École Nationale Supérieure des Beaux-Arts.

Anxious to find her own forms of expression, and without being impressed by the various dominant artistic tendencies, she devoted herself to the realistic representation of the human being. For her, only realistic art can convey the fine nuances of her emotional states, which it is often up to the viewer to decipher later. In order to make this approach a reality, she finally opted for sculpture. An independent artist since 1989, it was as a self-taught artist that she began to model her human figures.

Agnès Baillon works from resin, a unique material of its kind in the field of sculpture. When it comes to her medium-sized busts and figures, this material creates a certain transparency. The first visible layer of these objects, completely bleached and reminiscent of marble, covers some other material, metallic, such as aluminum foil. The partial whitening helping, Agnès Baillon manages to suggest the texture of the skin, an effect that serves at the same time to convey a great softness and psychic sensitivity. A similar role falls into the eyes, light blue, washed out, which are characteristic of all her works. Another recurring singularity: the more or less open mouths of the figures, very precisely and logically in the work entitled La Grande Chorale, and moreover always as a sign of strong emotion or astonishment.

Implementation without a priori

The artist places transient emotional states at the center of her intentions, moments when the child’s ingenuity serves as her inspiration. It is on these bases that Agnès Baillon, in a formidable way, captures and represents affective states, while succeeding in transmitting them intuitively to the viewer to whom she almost every time offers several meanings, even suggesting the mystery. To express this whole range of emotions with tiny nuances, between heightened sensitivity and psychic balance, Agnès Baillon undoubtedly chose the best means, that is to say the realistic representation. She most often works from photographs of people around her. Her bronzes, which are in the form of nudes or busts, are also unique in their kind because they are painted as well. Likewise, it is the ambivalent expression that prevails, in a register that is always frankly objective and seeking the natural, with poses that are sometimes intentionally awkward.