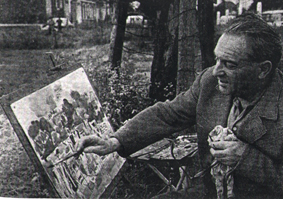 Born between Brie and Champagne in 1898, André Planson, painter of the Poetic Reality, very quickly distinguished himself by a powerful temperament, defined by the singular alliance of an earthly sensuality, the influence of his almost peasant Champagne heredity, and a sensitive spiritual and musical character.

He exhibited at the Bernier gallery for many years at the same time as he benefited from several state commissions:

From the 1950s, his time was divided between Paris and the province where regular stays brought it back to Brittany and Provence, leaving us with exceptional landscapes.

Unconditional lover of feminine beauty, his nudes and taverns scenes are masterpieces.