“Painting reveals the vital need to discover yourself as you would a country, to travel in yourself.” 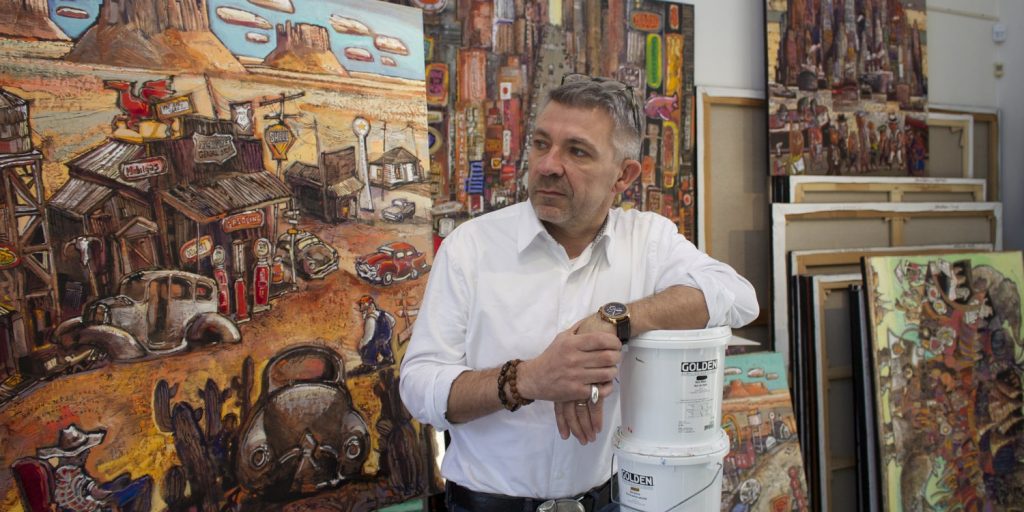 Ronel pursues his relentless exploration of the world; he crosses, travels and absorbs lands and cultures in a not classifiable approach of rampant collection. His latest trip led him to South Korea where a solo show became an excuse to conduct a graphic investigation in Seoul, which fueled his new travel diary “L’Asie en Zig-Zag”.

Furthermore, the artist added to his most recent work his thoughts and impressions about his journey through Cuba, opening his work to a blazing pallet where dominate the rich colors, developing compositions bearing a sort of magical realism, evocative of Garcia Marquez’s work.

Ronel’s universe is deeply magical, in Santiago de Cuba he subtly punctuates his compositions with clues reflecting the interbreeding with which his work is imbued: a Spanish cultural base crossed with African heritage, the divinities of Santeria in particular, which can be found in the Voodoo Pantheon. The exhibition is also tainted with the aftermaths of his latest African jaunt to Togo and Benin.

Chameleon painter, Ronel assimilates each place, each culture, he takes notes, collects travel diaries and drawings in a vibrant artistic pursuit of which the atelier is always the outcome.

In this workshop-sanctuary, in the midst of books, eclectic and ethnographic objects and road maps, he creates his compositions, following dream-like meanders.