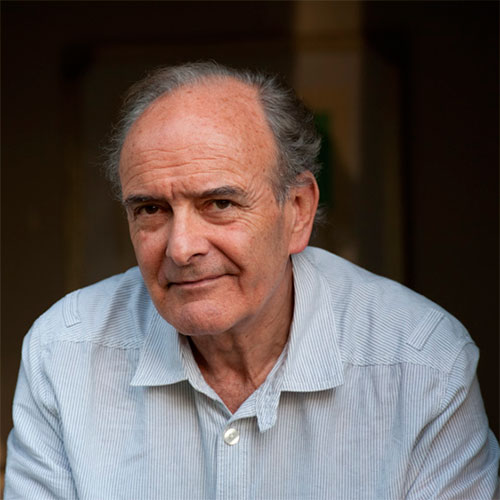 Alfredo Echazarreta is an artist who has been sailing and riding for years, in the imperishable Greco-Roman mythology. In “Célébration : le corps, la ligne ” , he seems to pay homage to the deepest and simple festivities that arise from the reunion and communion between human beings, from their rites and sacrifices.

Audentes fortuna juvat, “Fortune favors the daring,” writes Virgil in The Aeneid. The painter’s narratives, which evoke ancient epics, bring in his canvases intrepid characters who travel, fly, drink, dance, enjoy and seek. They transport their worlds in boats, or on a dreamy Rossinante, who has her feet on the Earth or in the air, and heads to latitudes that only he knows – he, the artist, the Creator. Or to a place that he created with his lines, his gestures enlivened by his incandescent colors, but with a minimalist palette. Some of his works are constructed with light transparencies; others, with thick layers of paint, and represent the same characters on their travels or wanderings. Where are their ships and horses leading them? Where do they come from? Why does the Creator place his favorite boat on his head, composing a scene with a red and tragic background?

Sometimes the boat contains a horse, thus integrating the artist’s entire pictorial universe in a single image; movement and calm, the drive of the nomad and the sedentary, simultaneously, in this boat which sails on the oceans and takes root on the Earth. Is it the Creator who wants to continue his journey and plow his vegetable garden at the same time? Is this the final ride in Charon’s boat of death or a sprouting of the Tree of Life? Is it the Creator who enjoys listening to a melody with his beloved and a hundred happy guests, but also cultivates the silence of the wise ancestors? Is this the Paradise of Alighieri, where he traveled guided by his master, Virgil?

Winged beings who accompany simple mortals seem to confirm this vision, likewise, many circular figures refer us to the myth of the eternal return, to the table, to the maternal womb, to an Earth that turns and turns while the men continue their celebrations in a cosmos without principle or end, in a state of weightlessness, where a constellation of suns, moons and bodies gives life to a new Universe. Visually, these new works are closer to Bosch’s Garden of Earthly Delights than to Buonarroti’s The Last Judgment, yet they also have something of Chagall’s flying lovers, Magritte’s moons and pipes, and someone might say : “This is not a Paradise”. However, he looks like him and finds his place in the vast and long history of art. From there, the Creator invites his spectators to embark in his ships and horses to travel to his refuge of light, at the heart of his work, heap of canvas and oil, of line and flesh, of encounter and loneliness, celebration and meditation.