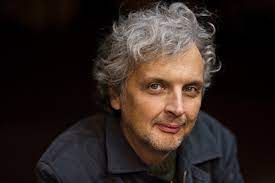 Cretan, Yannis Markantonakis was educated in London before moving to Paris in 1985, where he attended the painting academy of Saint-Roch under Jean Bertholle. From the master, he learned to compose in color for a painting that does not seek so much to represent as to find an agreement between thought and forms, and to achieve expressive power.

The interpretation of shapes leads him to favor the theme of boats. The schematism of its cargo ships has the rigor of these austere and powerful buildings.

He proceeds in interlocking fragments, working in the space that he compresses or stretches. His recent works do not hide the artisanal part of painting. The assembly by fragmentations, the staple left voluntarily visible as an assembly element, the sag, the stain, uncalculated but intuitively present expressions, participate in a work closer to that of the icon than to virtuosity.

The choice of a wooden panel as a support is explained by its frontal relationship to the painting, which requires a determined, convinced gesture. Slowly matured superimposed layers are taken up after absorption of the medium.

More discreet, the brush intervenes to suggest the subtle nuances of mist and vapors, thanks to the binder that lightens the oil.

Refinements which in no way detract from the monumentality of the play of powerfully written structures. Streets, views of its neighborhood complete an iconography under the influence of a gray and blue atmosphere, where white beaches are shaken by flat blacks.